I was pleasantly surprised to find myself with extra reading time after finishing the insane amount of arcs I had to read in May (I may have overdid it with the requesting). I decided what better time to read a completed series that had been on my TBR! I really enjoyed Mary E. Pearson’s The Remnant Chronicles and the Dance of Thieves duology was something that had been waiting for the perfect opportunity to read, and here it was! Also, it wasn’t until I started reading Dance of Thieves and looked up a map online that I found out that The Remnant Chronicles world is set in a future North America. Am I the only dolt that didn’t know this?!

I enjoyed The Remnant Chronicles but I put off reading Dance of Thieves because of it’s size and I was unsure how I felt about reading a companion series of sorts. Not only was I completely blown away by this book, but I ended up loving it even more than its predecessors.

Dance of Thieves begins with action straight off the back, which easily captured my attention. The chapters were a breeze to get through and I loved every minute I spent immersed in the world. Going into this book, for some reason I was under the impression that there would be multiple character POVs, so I was pleasantly surprised when I found out the only POVs were the two main characters, Jase and Kazi. The dynamic between Kazi and Jase was amazing. It was believable and excellently written. I think one of my favorite aspects was that in many YA fantasy books, the heroine spends a majority of the time denying or ignoring her feelings for the love interest when in situations similar to Kazi’s. However, Kazi never once does that; she admits them–begrudgingly–and acknowledges their inconvenience, but she never once acts like they aren’t there. It made her character feel so much more mature and nuanced.

I loved the little nods to The Remnant Chronicles and the appearance of Lia and Rafe near the and made the book even sweeter. I felt much more engrossed in the worldbuilding in Dance of Thieves and found the idea of Tor’s Watch and the Ballenger family totally intriguing. The book ended with a slight cliff-hanger and I was curious to see if my nagging suspicion I’ve had all book was correct! 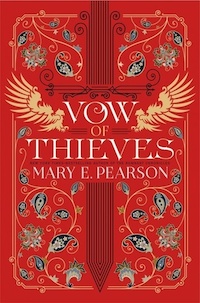 Very rarely is the sequel as good as the first book, but Vow of Thieves was just as amazing as its predecessor. I typically hate the second-book trope in which the main characters spend the majority of the time separated from each other, but there was so much going on with the plot and plenty of action that it didn’t bother me once!

I had made a few guesses in Dance of Thieves as to who was behind the cliffhanger, but I was completely taken by surprise! The machinations going are were very complex and intricate; way more than I had been expecting. At times it made my head spin, but for the most part it was easy to follow along with. And looking back there were definitely a few hints along the way.

Kaz and Jase’s relationship only grew stronger in this book, even being apart for a good chunk of the story. I love when two strong, independent characters are soft with each other and are unafraid to admit their feelings. Vow of Thieves was an action-packed, entertaining, thrilling sequel to Dance of Thieves. Honestly, I’m a little mad at myself for sleeping on this series for so long. These books greatly surpass The Remnant Chronicles and I absolutely loved them.