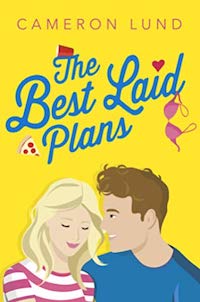 ARC provided by the publisher through BookishFirst.

Ladies and gentleman, I don’t believe it’s too early to say that I have found one of my favorite reads of the year. The Best Laid Plans was everything I had hoped it would be and so much more.

What is this book about? After Keely meets a cool college guy at her new job, she becomes determined to lose her virginity before he finds out how inexperience she is and drops her. She decides to enlist the help of her best friend, Andrew, a charming womanizer who has clearly been with enough girls to be able to help her out. Basically, all you need to know: CHILDHOOD FRIENDS-TO-LOVERS and UNREQUITED LOVE and delicious DRAMA and ANGST.

What did I like about this? I mean, my tastes are pretty simple. Throw me a friends-to-lovers plot with plenty of angst and miscommunications and drama-filled pages and you have yourself a winner.

Keely was amazing. Her character felt so relatable and her experiences really resonated with me. It was impossible not to read her awkward encounters and not remember the first few times I was alone with a boy in college. I suffered some serious second hand embarrassment while reading this which only meant that I was totally engaged and connected with her character.

I don’t even know where to begin with Andrew freaking Reed. Readers may find themselves thinking they know all about him–how many playboys with soft hearts do we have in YA?–but he’s SO MUCH BETTER THAN ALL THE OTHERS. I promise. Also, Keely, girl, read the damn signs!!! Ya boy is giving you all kinds of signals. I don’t say this often (never, really) but I Andrew Reed is giving Peter Kavinsky a serious run for his money as my favorite book boyfriend.

What didn’t I like? Okay, I’m just gonna come right out and say that I wish we had been given more of that last ~scene~ with Andrew and Keely. With all of the build up and tension from earlier in the book, I honestly felt so disappointed. I can’t say too much because of spoilers but I think it would have been so much more meaningful and to have been able to witness their thoughts/conversations/feelings in the moment.

Overall thoughts: If I could only choose one book from this year to have made into a movie it would be The Best Laid Plans (@Netflix I’m looking at you). And I say that barely two months into the year. I had been looking forward to this book since the first time I came across its synopsis and it was everything I had hoped for and more. Highly, highly recommend for lovers of YA contemporary and the beloved friends-to-lovers trope!