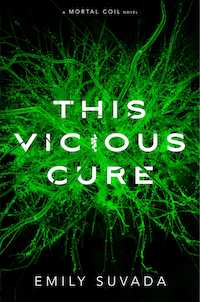 This Vicious Cure was one of my most anticipated releases for the year and therefore it pains me to admit how unsatisfied and disappointed I was with the conclusion to this trilogy. I was so excited for this release that I reread the first and seconds books–something I almost never do–because I loved them so much and wanted to fully enjoy the series all over again before starting this. Now I’m think that might have been a bad idea and perhaps that’s why This Vicious Cure feels so underwhelming.

What is this book about? This Vicious Cure picks up a little bit after the end of This Cruel Design. Jun Bei is back in control of her body, after wiping the memory of everyone from the past few months, and Catarina is trapped in their mind.

What did I like? Like the previous two books, the pacing was absolutely perfect. It starts out steady from the beginning, with just the right amount of action and forward-moving plot elements that easily kept me entertained throughout the story. There were also a few clever twists. I really loved finding out the truth about Catarina and her DNA!

What didn’t I like? This Vicious Cure is set through alternating chapters told through the points of views of Jun Bei and Catarina, and I’d be lying if I said I liked the change. I was not of fan of having to read half the book from her character mostly because we spent the first two books not having any kind of emotional connection towards her, and that didn’t change just because she now has her own chapters. I wouldn’t have minded a few chapters from her POV thrown in between Catarina’s, but more often than not I skimmed parts of her chapters because I just didn’t care enough.

I also felt really disconnected from the other characters as well. The interactions between Catarina and Cole, Leoben, and Anna were some of my favorite aspects from the previous books, and that was a something sorely missing from This Vicious Cure. And when they were together, it didn’t feel like a lot because the chapters would end abruptly and then jump back to Jun Bei.

And speaking of limited character interactions, the thing that was most disappointing was the complete lack of interaction between Catarina and Cole. After everything those two have been through together in the past two books, we are given one–O N E– scene with the two of them alone and having a conversation. Their feelings for each other are barely brought up, they hardly talk to each other, and their past is never touched upon. After the ending in This Cruel Design with Cole losing his memory and all their declarations of love, I was expecting……more? Instead, they exchanged probably less than fifty words throughout the book and we are given absolutely no closure for them. It honestly made me so sad and disappointed, especially since their relationship was one of my favorite parts from the series.

Overall thoughts: I would still absolute recommend this trilogy. It’s clever and unique and extremely well-written. But I wanted so much more from this conclusion than I was given, especially when everything regarding Catarina and Cole was basically swept under the rug and forgotten about.

Up Next to Read: THE BRONZED BEASTS
What’s your favorite color?
“I desire you. I burn for you. I can’t sleep at night for wanting of you. Even when I didn’t like you, I lusted for you. It’s the most maddening, beguiling, damnable thing, but there it is.”
“The universe is full of magical things patiently waiting for our wits to grow sharper.”
Have you read THE PRISON HEALER yet? It was one of my favorite reads this year. I recently finished THE GILDED CAGE and if possible, it was even better! I’m so excited for the last book in the series and can’t wait to get my hands on it ❤️
QOTD: What are you currently reading?
×
Loading Comments...
%d bloggers like this: