Welcome to my stop on the King of Fools book tour! Thank you to Fantastic Flying Book Club for organizing the tour and allowing me to participate as a tour host!

On the quest to find her missing mother, prim and proper Enne Salta became reluctant allies with Levi Glaisyer, the city’s most famous con man. Saving his life in the Shadow Game forced Enne to assume the identity of Seance, a mysterious underworld figure. Now, with the Chancellor of the Republic dead and bounties on both their heads, she and Levi must play a dangerous game of crime and politics…with the very fate of New Reynes at stake.

Thirsting for his freedom and the chance to build an empire, Levi enters an unlikely partnership with Vianca Augustine’s estranged son. Meanwhile, Enne remains trapped by the mafia donna’s binding oath, playing the roles of both darling lady and cunning street lord, unsure which side of herself reflects the truth.

As Enne and Levi walk a path of unimaginable wealth and opportunity, new relationships and deadly secrets could quickly lead them into ruin. And when unforeseen players enter the game, they must each make an impossible choice: To sacrifice everything they’ve earned in order to survive…or die as legends.

Ace of Shades was a book that took me completely by surprise when I read it, and so I was really looking forward to the next installment in the series. I have to admit that it started out a bit slow, but once the story starts rolling King of Fools is a book that will likely have the reader flying through the pages.

It took me longer than I had anticipated to get back into the world of King of Fools and to remember everything that had happened previously. However, once the plot started to pick up, I found myself once again really enjoying the characters and the story! One of the best aspects of the book was the character growth present throughout. While there was not much action-wise until later on, the story was full of astounding character developments. In particular, I absolutely loved how Enne finally embraced her upbringing and used her unique personality to her advantage.

Amanda Foody has repeatedly referred to King of Fools as her #GirlGang book and after reading this I could totally see why! Enna fully assumes the Seance facade and creates her own gang. I loved watching the growth of the Spirits and Enne’s relationships with the other girls.

Although there was a lot less action present in King of Fools, there was plenty of intrigue and character development to keep the plot interesting and moving forward. From heartbreaking twists to a jaw-dropping cliffhanger, I’m really looking forward to the conclusion of this series! 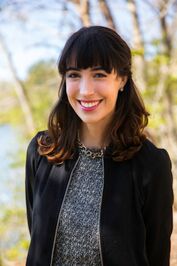 Amanda Foody has always considered imagination to be our best attempt at magic. After spending her childhood longing to attend Hogwarts, she now loves to write about immersive settings and characters grappling with insurmountable destinies. Currently, she works as a tax accountant in Philadelphia, PA, surrounded by her many siblings and many books.

She is the author of two published novels, DAUGHTER OF THE BURNING CITY and ACE OF SHADES. The next books of THE SHADOW GAME trilogy will release in 2019 and 2020.

One finished copy of King of Fools (US only).