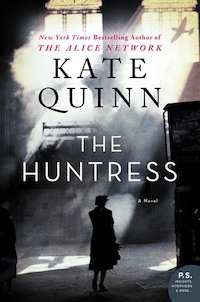 It’s hard to explain just how ecstatic I was to learn that Kate Quinn wrote another WWII-inspired historical fiction. If you haven’t learned by now, she is the ultimate queen of historical fiction novels and I devour everything she writes. And even though this wasn’t a five star read for me, it was still an amazing book.

As always, Quinn did such a tremendous job weaving historical facts with fiction to create a totally unique and captivating story. The chapters alternate between the three main characters: Ian, Nina, and Jordan. And if you’ve read The Alice Network, yes that is the same Ian Graham that briefly appeared in that book! In addition to Ian, a few other characters from The Alice Network make cameos in The Huntress, it was so great to see them mentioned! I highly enjoyed Ian and Nina’s POVs, but I wasn’t big on Jordan’s character. Her storyline was very interesting and I always looked forward to her chapters because of the connection to the overall plot, but as I really didn’t connect with her all that much.

Once the story really gets going, The Huntress is a hard book to put down. The readers are told at the beginning what happened, but more and more of the truth and events leading up to it are revealed as the story evolves. The theme of Nazi criminals and the aftermath of World War II and the Nuremberg Trials was absolutely fascinating to me. The author notes at the end of the story were very eye opening and I definitely will be doing some more of my own research on this subject in the future. Another excellent novel by Kate Quinn; I don’t see her being dethroned as my favorite author any time soon.

“He’s my person. He’s always been my person. My best friend, my confidant, probably the love of my life. And I’ve spent the last eleven years being angry and self-righteous. But at the end of the day, he tore a hole in us, and fate ripped it wide open.”
April Wrap-Up 🌷
May will be here next week, here’s to hoping warm weather comes with it!
Happy Monday! Hope you all have a great week! ☀️ It’s the last week of April and I have two books left on this month’s TBR so fingers crossed I finish them in time 🤞🏼
“A dog will teach you unconditional love. If you can have that in your life, things won’t be too bad.”
QOTD: Do you set a TBR for yourself each month or just read what you feel like?