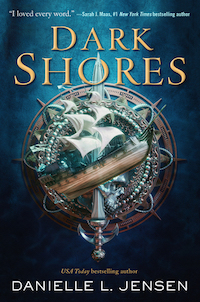 A PIRATE WITH A WILL OF IRON
Teriana is the second mate of the Quincense, a ship beholden to the Goddess of the Seas. Her people are born of the waves, and they alone know how to cross the impassable oceans between East and West.

A SOLDIER WITH A SECRET
Marcus is the commander of the Thirty-Seventh, the notorious legion that has led the Celendor Empire to conquer the entire East. The legion is his only family, and even they don’t know the secret he’s been hiding since childhood.

A DANGEROUS QUEST
When a power-hungry ruler captures Teriana’s crew and threatens to reveal Marcus’s secret unless they help him conquer the unknown West, the two are forced into an unlikely–and unwilling– alliance. They unite for the sake of their families, but both must decide how far they are willing to go, and how much they are willing to sacrifice.