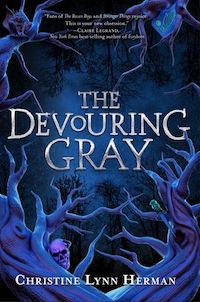 The Devouring Gray is a release I’ve been looking forward to for quite a while, and I super thankful I was able to get my hands on an early copy! This spellbinding book is full of supernatural spookiness with a lot of Riverdale + Stranger Things vibes and I thoroughly enjoyed every minute of it.

The Devouring Gray is completely atmospheric. The vivid descriptions really brought forth the creepy elements and made it easy to become immersed in the story. The plot follows the founding families of Four Paths, and how they use their gifts to protect the town from the Gray. The types of magic the families possess were dark and mysterious, and I loved the gothic vibes.

The story is told through three POVs, but there are arguably four main characters. I wasn’t that invested in the characters to begin with, but I changed opinion by the end and came to really like them all. Usually if I don’t connect with the characters, I tend not to like the book, but the plot and writing were so good it was easy to overlook. The romances are very subtle, and while I didn’t like either of the pairings at first, they did begin to grow on me by the end. I’m looking forward to the next book and the continued growth of these characters and their complex relationships with each other!

“The universe is full of magical things patiently waiting for our wits to grow sharper.”
Have you read THE PRISON HEALER yet? It was one of my favorite reads this year. I recently finished THE GILDED CAGE and if possible, it was even better! I’m so excited for the last book in the series and can’t wait to get my hands on it ❤️
QOTD: What are you currently reading?
Need a spooky book to read this October? Look no further than THE BONE HOUSES! It’s full of magic, Welsh mythology, and the undead. It gives off The Black Cauldron vibes which makes it the perfect dark, eerie read for Spooky Season!
Here me out: stenciled edges are the best kind of special edition modifications.
What’s on your agenda for the weekend?
×
Loading Comments...
%d bloggers like this: