Welcome to my stop on the An Affair of Poisons book tour! Thank you to Fantastic Flying Book Club for organizing the tour and allowing me to participate as a tour host! 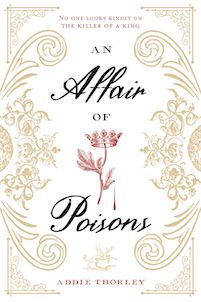 After unwittingly helping her mother poison King Louis XIV, seventeen-year-old alchemist Mirabelle Monvoisin is forced to see her mother’s Shadow Society in a horrifying new light: they’re not heroes of the people, as they’ve always claimed to be, but murderers. Herself included. Mira tries to ease her guilt by brewing helpful curatives, but her hunger tonics and headache remedies cannot right past wrongs or save the dissenters her mother vows to purge.

Royal bastard Josse de Bourbon is more kitchen boy than fils de France. But when the Shadow Society assassinates the Sun King and half the royal court, he must become the prince he was never meant to be in order to save his injured sisters and the petulant Dauphin. Forced to hide in the derelict sewers beneath the city, any hope of reclaiming Paris seems impossible—until Josse’s path collides with Mirabelle’s, and he finds a surprising ally in his sworn enemy.

She’s a deadly poisoner. He’s a bastard prince. Together, they form a tenuous pact to unite the commoners and former nobility against the Shadow Society. But can a rebellion built on mistrust ever hope to succeed?

When I first read the synopsis for this book, I was extremely intrigued. I wasn’t sure what I should expect going into this, and honestly those expectations were not high. An Affair of Poisons proved me wrong in the most wonderful way: I absolutely adored this book so much more than I thought I would.

The first word that comes to mind when in describing An Affair of Poisons is fun. There are a lot of things to love about this book. Female alchemists? Yep. A broody, bastard prince? Check. Enemies to lovers romance? You got it. The writing is completely compelling and the fast-paced, interesting plot easily keeps the reader entertained. The plot is full of magic, murder scandals, and mayhem; all set in a historical French setting and based on real historical events (see: L’affaire des poisons). The story Addie Thorley has created is so imaginative and well-crafted. A lot of time, effort, and research went into creating this book and it easily shows.

An Affair of Poisons was the alternate YA historical fiction story that I didn’t know I needed. I really enjoyed this unique and fascinating twist on historical events and the characters that were written to perfection. I’m looking forward to whatever Addie Thorley has up her sleeve next!

Addie Thorley spent her childhood playing soccer, riding horses, and scribbling stories. After graduating from the University of Utah with a degree in journalism, she decided “hard news” didn’t contain enough magic and kissing, so she flung herself into the land of fiction and never looked back.

She now lives in Princeton, New Jersey with her husband, daughter, and wolf dog, and when she’s not writing she can be found gallivanting in the woods or galloping around the barn where she works as a horse trainer and exercise rider. AN AFFAIR OF POISONS is her debut novel.

Up Next to Read: THE BRONZED BEASTS
What’s your favorite color?
“I desire you. I burn for you. I can’t sleep at night for wanting of you. Even when I didn’t like you, I lusted for you. It’s the most maddening, beguiling, damnable thing, but there it is.”
“The universe is full of magical things patiently waiting for our wits to grow sharper.”
Have you read THE PRISON HEALER yet? It was one of my favorite reads this year. I recently finished THE GILDED CAGE and if possible, it was even better! I’m so excited for the last book in the series and can’t wait to get my hands on it ❤️
QOTD: What are you currently reading?
×
Loading Comments...
%d bloggers like this: