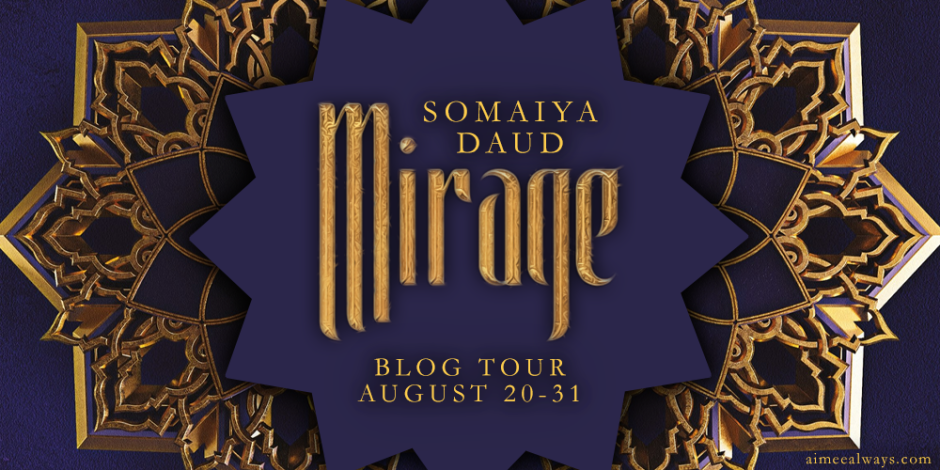 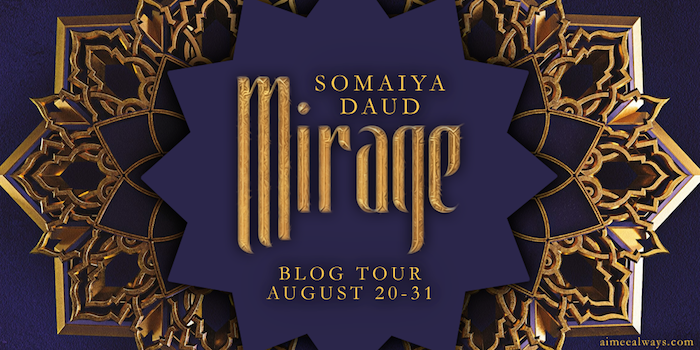 Welcome to my stop on the Mirage book tour! Thank you to Aimee at Aimee, Always for organizing the tour and allowing me to participate as a tour host!

In a star system dominated by the brutal Vathek empire, eighteen-year-old Amani is a dreamer. She dreams of what life was like before the occupation; she dreams of writing poetry like the old-world poems she adores; she dreams of receiving a sign from Dihya that one day, she, too, will have adventure, and travel beyond her isolated moon.

But when adventure comes for Amani, it is not what she expects: she is kidnapped by the regime and taken in secret to the royal palace, where she discovers that she is nearly identical to the cruel half-Vathek Princess Maram. The princess is so hated by her conquered people that she requires a body double, someone to appear in public as Maram, ready to die in her place.

As Amani is forced into her new role, she can’t help but enjoy the palace’s beauty—and her time with the princess’ fiancé, Idris. But the glitter of the royal court belies a world of violence and fear. If Amani ever wishes to see her family again, she must play the princess to perfection…because one wrong move could lead to her death.

“Hope might have set fire to all things, but out of those ashes the resistance to the Vath would rise. I would make sure of it.”

Mirage was everything I had hoped it would be. With dynamic characters, beautiful writing, and an important message, I was completely captivated from the beginning and there wasn’t much I didn’t enjoy. This is such a wonderful debut novel and I can’t wait for more from this author.

Mirage is Moroccan-inspired sci-fi story that reads like a fantasy. The elements of the two genres blend seamlessly together. From the lush writing to the vivid descriptions, Somaiya Daud has created an intriguing world that I couldn’t get enough of. It was so easy to sit down and become immersed in the story I was reading.

“Whatever Maram thought she could do to me, I could endure. I would endure and survive. I wouldn’t let her break me. No matter how hard she tried.”

The characters in Mirage were very well-developed and interesting. Amani was a wonderful protagonist with admiring inner strength and values. Maram is a complex character, with many different layers to her. She was so fascinating and I was surprised to find myself really liking her. The author gave her character a lot of depth which made the story so much more exciting. I loved watching how the interactions between Maram and Amani changed over time, and the reluctant friendship that began to develop. In regards to the romance; it did feel a little fast, but I didn’t mind it that much since it was subtle and there was so many other wonderful things happening in the story.

Mirage was a pleasant surprise, and I’m still in awe that this is Somaiya Daud’s debut. Her writing, world-building, plot, and characters all came together perfectly to create an intricate, engaging story. I would definitely recommend giving this book a read as soon as it releases!

Somaiya Daud was born in a Midwestern city, and spent a large part of her childhood and adolescence moving around. Like most writers, she started when she was young and never really stopped. Her love of all things books propelled her to get a degree in English literature (specializing in the medieval and early modern), and while she worked on her Master’s degree she doubled as a bookseller at Politics and Prose in their children’s department. Determined to remain in school for as long as possible, she packed her bags in 2014 and moved the west coast to pursue a doctoral degree in English literature. Now she’s preparing to write a dissertation on Victorians, rocks, race, and the environment.

One finished copy of Mirage (US only).