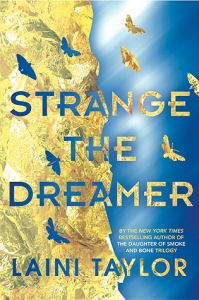 “In the realm of real, she might have been just a girl, in hiding and in peril, but in the unconscious mind she was all-powerful: sorceress and storyteller, puppeteer and dark enthraller. Sarai was the Muse of Nightmares.”

I must be on some fantastic reading roll, because lately I’ve only been reading really great books and Strange the Dreamer is no exception.

Laini Taylor’s writing and vivid descriptions are as impressive as ever. She creates an immensely imaginative, magical world that pulls you right into the depths of the story. The plot is extremely well crafted and engaging, full of gods and goddesses, magical creatures, ghosts, and monsters.

There was a large cast of characters that were diverse in their backgrounds, individuality, struggles, and personal stories. The variety of characters felt real and each was intriguing in their own way. I found both Lazlo and Sarai to be wonderful narrators and enjoyed reading from both of their POVs.

I know the main romance is focused on the main characters, Lazlo and Sarai, whose love story is both beautiful and bittersweet, but I need to talk about Eril-Fane and Azareen for a moment. Their story is one of the most tragic and heartbreaking I have ever read, and they were only side characters. I felt so deeply for them that they quickly have become one of my favorite relationships ever. Every time another part of their story was revealed, my heart splintered into more and more pieces until I didn’t think I could take anymore.

“Where, eighteen years ago, she had spent five, eager, tireless, burning nights with her beautiful young husband before the gods stole him away.”

“Theirs wasn’t the only love story ended by the gods, but it was the only one that ended the gods.”

“And Eril-Fane, it was his fate to see his bride led down the sinister corridor…and finally Isagol’s calculus had failed. Love was no match for what burned in Eril-Fane when he heard Azareen’s first screams.”

Erin-Fane’s guilt and shame and grief over his past was heartbreaking. Azareen’s unwavering devotion and support to him is heartbreaking. The state of what their relationship has become is heartbreaking. I honestly would read an entire book just on their story alone-past and present. The only thing I want out of the sequel is for them to have a happy ending.

The end of the book was bittersweet and yet left me aching for the sequel. I’m excited for what Laini Taylor has in store for us. Overall, a richly imaginative and wonderful story.

One thought on “REVIEW: Strange the Dreamer – Laini Taylor”