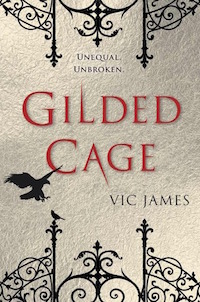 A lot of people have raved over Gilded Cage, but I , for one, couldn’t figure out what all the hype was about. First of all, this book was much different than what I had expected. I’ll dive into more on that later but I think that was a big part of my dislike, along with high expectations due to all the raving five star review (when will I learn?).

Gilded Cage is a dystopian novel, but what sets it apart from all the other YA dystopian novels is the plot. Not only is it intricate and complex, but it’s different-a good different. The world building was strong. It took me a while to get used to this type of dystopian world, similar to how I was when I read Red Queen, but once I got into it I was impressed by the world the author had built.

One issue I had was the pacing of the book. At one point, less than three-quarters of the way, I realized that six months had already passed since the start. Six months, and yet I knew absolutely nothing about most of the characters, including Abi, who I had assumed was one of the main protagonists. I was 75% done with the book and had only read two chapters from her POV and had no clue what her storyline was or anything about her character. The combination of the pacing and the multiple POVs led me to feel unconnected to any of the characters and like I was reading about strangers the entire time. The one character I did really appreciate was Gavar. He seemed the most complex, and his struggles were interesting and complicated. I wanted to read more and more from his perspective. He is clearly going to end up as some sort of antihero and I could not be more on board. There’s definitely more to him than we know and I’m dying to know more about what happened between him and Leah. If I continue with the series, it will be for Gavar alone.

The romance was basically nonexistent. It’s not usually a deal breaker for me unless the story is lacking, which I thought it was. I thought I would be all about the Abi/Jenner pairing, but I honestly wasn’t all the involved in their story. Probably because it was very rushed and there was way too much telling instead of showing. All of a sudden there were these intense feelings between them, but since we only had Abi’s POV two or three times throughout the whole book, we never get to see any conversations  or interactions between them, and never get the chance to see these feelings develop.

And now the thing that bothered me the most: I felt so misled going into this. This was a very different story than what the synopsis suggested. Don’t get me wrong: the plot is strong and unique, but it was not at all what I was expecting to read. I dissected the synopsis apart below. There may or may not be slight spoilers ahead, depending on your definition of a spoiler. Proceed with caution.

All in all, unfortunately I wasn’t too impressed by the book. I gave it an extra star because the basics of the plot were pretty interesting and different from the usual young adult dystopian books, and also because Gavar.