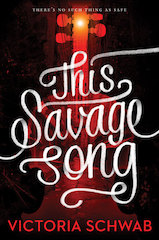 “Monsters, monsters, big and small,
They’re gonna come and eat you all!”

This Savage Song is a gritty, violent gem of a story set in an urban fantasy setting. Once again, Schwab has proved what an incredible writer and storyteller she is. She created an amazing, convincing world with wonderful characters. The plot was creative and original and had me hooked from the synopsis.

“You wanted to feel alive, right? It doesn’t matter if you’re monster or human. Living hurts.”

Though the book was lacking plot-wise, I was entertained from start to finish. I was okay with the limited action since we learn a lot about the world and the monsters in it, as well as becoming well-acquainted with the two main characters, Kate and August. Kate was cold, snarky, and tough, but it was what she choose to be, rather than who she actually is, in order to impress her father and be accepted by him. August, a monster, was loyal and kind. He wishes he was human and struggle to comes to term with who he is, especially since he only feels relatively normal after consuming the souls of not-so-innocent humans. Both Kate and August have hidden vulnerabilities that make them complex, well-rounded characters that are easy to connect with.

“It was a cruel trick of the universe, thought August, that he only felt human after doing something monstrous.”

There was no romance in this book, which for me had both its pros and cons. On the plus side, it’s not very often we see YA books feature characters who have great chemistry without any romantic feelings (Rowan x Aelin don’t count anymore #stillbitter). The book proves that romance isn’t a necessity for a story to function well. The only negative is more of a “it’s not you, it’s me”. Call me a romantic, but I like to see at least a little romance in the books I read. I’m holding out hope that it develops in later books, because I believe there was definitely something there between them.

I really look forward to reading the next book and hope to learn more about how monsters are created, and how the world came to be as it is. This Savage Song was a very compelling read that I enjoyed immensely!

One thought on “REVIEW: This Savage Song – Victoria Schwab”

Do you read holiday romances at this time of year?
What’s the last book that gave you a book hangover?
November Wrap-Up 🍂
What sequel are you excited to read?
🏴‍☠️ 🏴‍☠️ 🏴‍☠️ 🏴‍☠️ 🏴‍☠️
“What hold does Alaska have on them? What makes this place worth giving up everything?”