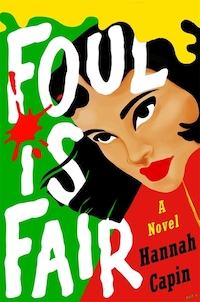 What is this book about? The premise is amazing. This is a story about a group of teenage girls enacting revenge on a group of prep boys after one of the girls was assaulted at a party. The book is a loose retelling of Macbeth, which happens to be one of my favorite Shakespeare plays, with a little bit of inspiration from Heathers.

What did I like? I really loved the Macbeth retelling angle. The nods to original play are subtle, but so extremely well done. I also really liked that Jade and her friends were unapologetically the mean girls and owned it. There was no apologies for their behavior and they didn’t have a holier than thou attitude.

What didn’t I like? The first major issue I had with the book was the writing. To put it plainly: I couldn’t stand it. The scenes were very abrupt and the way the dialogue was written felt so stilted and unnatural. My other problem with the book was that a lot of the things that happened felt very far-fetched and unbelievable. I’m supposed to be believe that a group of (barely) sixteen-year-old girls were the mastermind behind multiple murders within the span of a week? That the main character would be able to successfully manipulate a boy into doing whatever she asked of him after one meeting? If the time frame had been extended or the criminal acts less severe, I think the story would have been more impactful to me. Yes, it’s fiction, however as a reader I can only suspend my belief to a limit.

Overall thoughts: The plot is a very clever retelling of Macbeth, but considering I almost DNF’d this like three times because I couldn’t stand the way it was written, I definitely did not enjoy this as much as I had hoped.