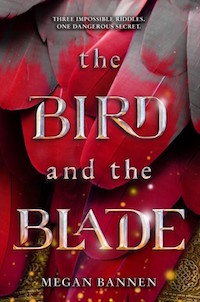 Title: The Bird and the Blade
Author: Megan Bannen
Rating: ★★★★★

“And wilderness is paradise now.”

I am writing this review from the grave, because this book has slayed me. I knew going into this that it was going to hurt spectacularly: I thought that by reading the other reviews I would be prepared for the inevitable heartbreaking ending, but I underestimated Megan Bannen’s ability to completely annihilate my emotions. The Bird and the Blade was a fascinating, compelling, stunning story that captured my heart and attention from the very beginning.

The story was both unique and intriguing in that it blended historical elements of the Mongol Empire with the Italian opera, Turandot, and it did so seamlessly. I really enjoyed the pacing and the format of the book; we start with a glimpse of the end, before jumping back to the beginning and following the characters’ story from there. I loved Jinghua. She was unlike so many other Young Adult heroines we typically encounter in fantasy. She isn’t exceptionally beautifully, or remarkably skilled in fighting, or even overly bright. She’s average and plain, and that was what makes her both human and relatable. As the story unfolds, we slowly learn more about her and the secrets she keeps and she becomes an even more dynamic character. I also loved the changing interactions between her and the other characters as the story progresses; the reluctant friendship she forms with Timur and the slow-burn romance that develops with Khalaf.

While it contains plenty of action and political intrigue, The Bird and the Blade is more of a love story than a fantasy. However, it was so unbelievably beautiful and captivating that it didn’t even strike me as being that way until after I had finished and could reflect back on the book. And even though I had expected the tears and anguish, the ending was still a sucker punch to the face. The story ends in a way that is both heart-warming and heart-wrenching, and altogether unforgettable. The Bird and the Blade was a breathtaking, impressive book and definitely one of my favorites of the year.

🎶 here comes the sun 🎶
QOTD: What trends have you noticed for new releases? There seems to be quite a few books coming out this year about dark, magical woods and I could not be more excited! ✨
“That love of maidens for monsters, that does not fade with time.”
Happy Sunday! What are your plans for today? I’ll be watching the Super Bowl! 🏈
QOTD: What are your reading goals for this year?
QOTD: What were your reading goals for the year? Have you accomplished them?
×
Loading Comments...
Comment
×
<span>%d</span> bloggers like this: