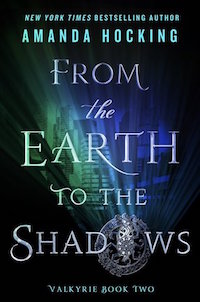 Title: From the Earth to the Shadows (Valkyrie #2)
Author: Amanda Hocking
Rating: ★★½

Between the Blade and the Heart was not what I had been expecting, so I was really hoping I would like From the Earth to the Shadows better since I was already prepared for the setting and world. Unfortunately, some of the issues from the first book were not improved upon and the story continued to fall flat for me.

From the Earth to the Shadows picks up right where the first book ends. One of the things I did enjoy was that there was a lot more action and fight scenes. I continued to struggle to connect with Malin and the story. I felt myself skimming some portions of the book. I was hoping for more development in regards to her relationship with Asher, but it still felt shallow and undeveloped. There was also no character growth; the characters continued to be flat and one-dimensional. A lot of the tension and obstacles Malin and the other characters faced were resolved too conveniently to be believable, and the ending was very anti-climatic. I really wanted to love this series, because – hello, valkyries – but it just wasn’t the series for me.